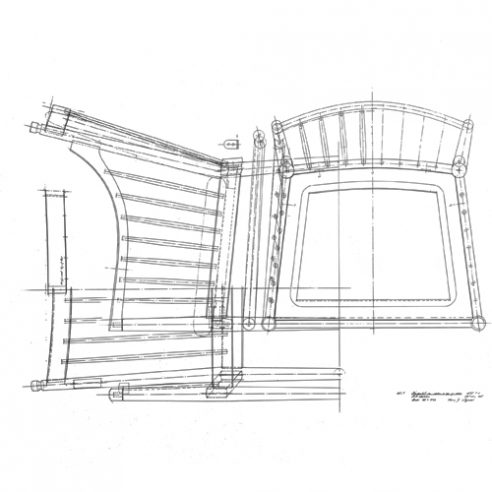 The current PP105 dated 1970, has undergone very few changes compared to the 1947 model to which it relates. It is a comfortable armchair that encourages and supports an upright posture and comes quipped with seat and back cushions upholstered in fabric or leather.

The chair’s height makes it especially easy for the elderly with less strength in their legs and back to sit down and get up from.

In 1947 the furnishing of a living room was one of the assignments of the Cabinetmaker Guild Exhibition’s competition for which Wegner produced a proposal together cabinet maker Johannes Hansen. They called it a ‘Living Room for a Young Family’ that consisted of a rest and

work area. In the rest area Wegner presented among other things two completely different chairs that, thanks to their common motif, were clearly related to each other. The one was placed by a coffee table, but stood by itself in the room like a modern sculpture, to be seen from all sides. This was the Peacock Chair, which attracted attention with its large, organic bow-shaped back.

The other chair was the predecessor to PP105. This one was not like a sculpture, but was a rock solid, practical armchair. It didn’t beg for attention, which was also reflected by its placement in the room. It was exhibited up against a wall, squeezed between a sofa, a bookcase and a worktable. A spatial placement that indirectly revealed its proposed function, which was not as a chair one used for flopping down on, but for reading, sewing, or holding conversations.