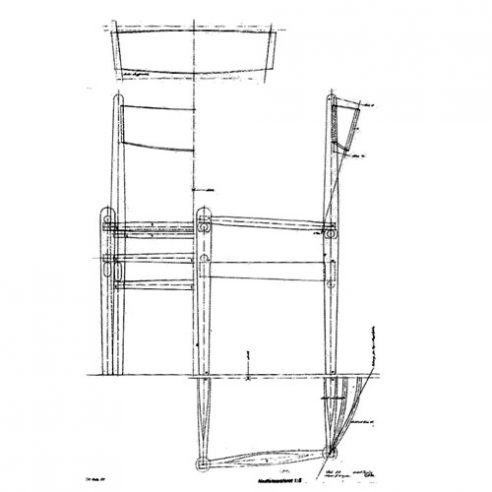 The Side Chair by Wegner is a Shaker inspired dining chair – beauty expressed by it’s functionality. Slender, but strong straight wooden frame and woven seat. In the early 1960’s when many furniture designers such as Charles and Ray Eames Danish Verner Panton, Finnish-American Eero Saarinen and the Frenchman, Pierre Paulin, were experimenting with new materials like, aluminium, fibreglass, plastic and rubber, Wegner chose to go in a different direction altogether.

The dining room chair, CH36, was the first in a long series of Shaker inspired chairs that Wegner designed for Carl Hansen & Son throughout the 1960s. The Shaker, a religious sect in the United States, comprising of northern European immigrants had since the

beginning of the 19th century have lived in small communities.

There is absolutely nothing superfluous about CH36. It is light, taught, rectilinear, with a woven seat and slightly angled back providing little opportunity to shift one’s sitting position. The underframe, strechers, legs and seat are quite reminiscent of the Wishbone Chair, another dining room chair made by Carl Hansen & Son, yet because of the Wishbone Chair’s open, round sculptural top, the two appear to be diametrical opposites.