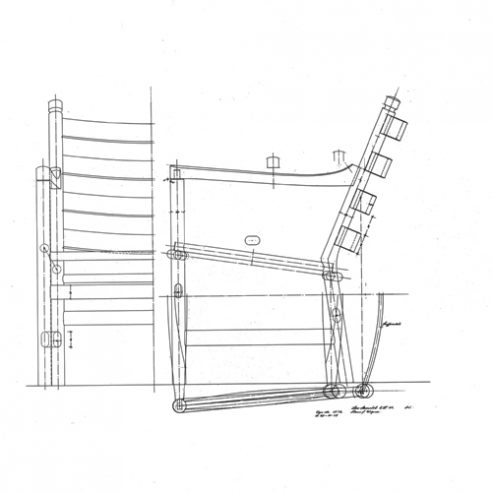 The same ascetic expression found in CH36 is also evident in CH44.  While one sits on CH36 for a specific purpose, one chooses to sit on the CH44 to rest and relax. Unlike CH36, CH44 is sturdier in appearance, setting it apart from the Shaker chairs, yet it has the same four characteristic rails in the back. It comes with matching seat and back cushions to further enhance sitting comfort.

While he was no doubt interested in these new materials and would probably have liked to investigate their possibilities more than he did, one of the reasons he didn’t was because he felt obliged to create new furniture designs each year for the marketing organization, Salesco which only marketed and sold Wegner’s furniture.  In

other words, he was needed elsewhere and there one worked in wood.

The dining room chair CH37 is a companion to model CH36. These two chairs were the first in a long series of Shaker inspired chairs that Wegner designed for Carl Hansen & Son throughout the 1960s. The Shaker, a religious sect in the United States, comprising of northern European immigrants had since the beginning of the 19th century have lived in small communities.