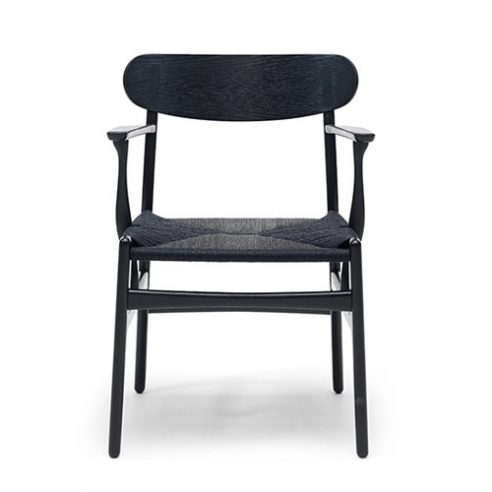 The design of CH26 dates to this period although documented in Wegner’s sketches was not put into production by the company. However it is clear that the chair shares common themes from Wegner’s lounge chair  CH22, one of the first models Wegner designed specifically for Carl Hansen and Son during this period.

Firstly, the chairs frame supports a seat of woven

papercord as in his earlier Peacock Chair as is the use of finger joints at each corner of the seat frame and wedges to hold the front legs into place. The rustic looking armrests are held by axe shaped supports that thicken where strength is required where they connect to the chairs frame.

The back rest is a simple shell in form pressed veneer and is minimal in size compared to Wegner’s earlier Shell Chair GE1936 which Wegner had designed for Fritz Hansen two years earlier. Dining Chair CH26 was finally launched  by Carl Hansen & Son in 2016 and while manufactured using up too date production techniques and modern machinery is produced in line with Wegner’s original design ideas and finished with a hand crafted woven seat