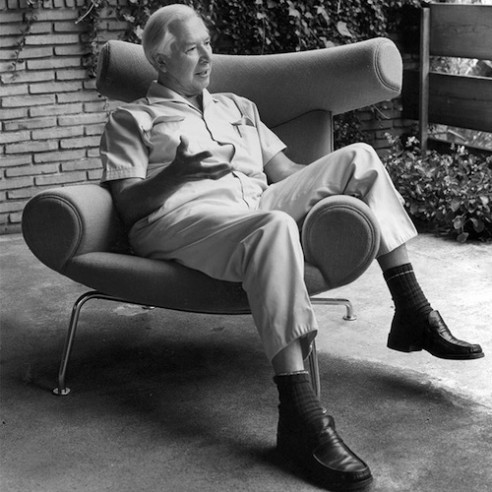 In 1988, Erik Jørgensen was contacted by Hans J. Wegner, who had designed the Oxchair in 1960. The Ox- chair is one of the most challenging chairs to upholster, and that is exactly why Wegner came to Erik Jør- gensen. With his upholstery expertise, Erik Jørgensen was able to produce the chair, and it was launched in 1989 at the international furniture fair in Milan. In 1960, Wegner designed a feminine counterpart to the Oxchair, the Queen chair, which went into production in 2010.

The Ox Chair (EJ100) is a rare piece of furniture from Wegner’s hand in that the wood and his sublime cabinetmaking craftsmanship are hidden from view.

Wegner designed it in 1960 for AP Stolen, the manufacturer who produced his upholstered chairs. As a easy chair, it takes up a lot of room. In this way it continues in the tradition of Wegner’s three-part shell chair from 1949 and especially the Flag Halyard Chair, which he also chose to fashion in a half-sitting/half-reclining position. Like the Flag Halyard Chair, EJ100 is equipped with an underframe of chrome-plated steel

, but unlike the Flag Halyard’s visually light and airy upper part, EJ100’s upper section is heavy and imposing, making it a very masculine and dominating piece of furniture.

The chair’s main body is comprised of a seat, armrests and back moulded in cold cured foam plus a neck cushion so thick and wide as to form an independent, highly conspicuous part of the whole, something between side-wings and a cylindrical  “sausage shaped” bolster. No wonder, then, that its Danish nickname was the ‘Sausage Chair’,

The  large neck cushion was also said to resemble the horns of a bull or an ox – hence its English name: the Ox Chair. Because of its potent masculinity, the chair best comes into its own when given a taut leather covering. In 1957 Wegner had designed a dining room chair for Johannes Hansen whose upholstered leather top rail also resembled the horns of a bull. Apparently he was not finished with the theme until the year after he designed EJ100, when he designed JH518 (today PP518), a very characteristic Wegner dining room chair called the Bull Chair.

EJ100 is a large chair. Its size and soft, round forms – reminiscent of the work of English sculptor Henry Moore – invite one to curl up in its embrace, safe and secure. Wegner had the Ox Chair in his own living room. He was photographed in it a number of times, which suggests he was particularly fond of the chair, not least of all because one can sit in so many ways. This was something Wegner always took into consideration, since he felt it important to be able to sit in different positions in order to keep the body from becoming stiff.

EJ100, which was called AP46 at the time, was taken out of production by AP Stolen after only a few years, to be resumed by Erik Jørgensen in 1985. It has been in production ever since. The Ox Chair is also available in a version without the ‘sausage shaped’ bolster, called ‘the Queen’.