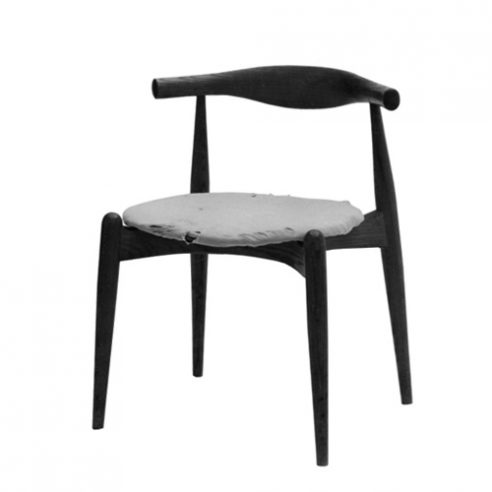 An all Black version of Hans J. Wegner’s Elbow chair, model CH20 is finished in smooth black lacquer over solid beech. Upholstery is in either Halingdal fabric or Thor leather.

The CH20 is a simple half industrial design that Wegner originally drew for Fritz Hansen who never produced it. Similar to Wegner’s earlier Heart Chair the CH20 has a solid wooden top rail machined from a single piece of timber. The simple construction contain the chairs proportions within the footprint of the seat. It is a strong practical chair that is stackable.

On this occasion the long relationship between Schiang and the Wegner

Design Studio provided the solution. As early as 1994 Marianne Wegner had suggested an early design by her father, a little stacking chair designed but never produced by Fritz Hansen, for a large project we were working on with Getama in Central London.