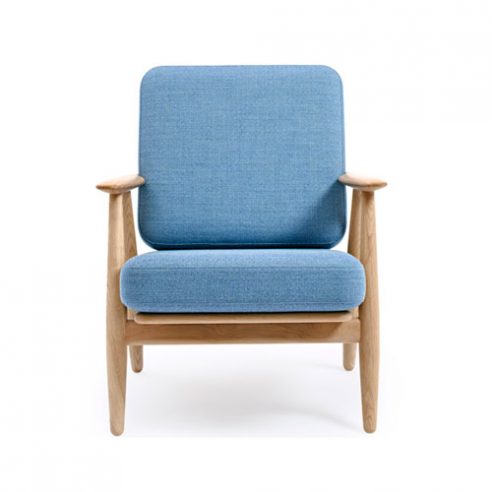 The Cigar chair so named due to the striking shape of the armrests was relaunched by Getama in June 2017 following high prices and increased demand for used chairs at auction.

The Cigar chair is available with plain cushions or with piping and buttons in contrasting leather.

Getama one of Denmark’s best know furniture makers was approached by Wegner in the late 1940’s as he believed he could utilise their expertise in  mattress making for his sofas and soft seating designs. Wegner combined

the companies expertise with their wood working skills to design a series of chairs and sofas.

In all Wegner developed over 120 designs with the Company of which the GE 240 has become one of the most popular since the designers death in 2007.

Produced with soft downtop cushions to give many hours of comfortable sitting over an entire evening. The GE 240 is also available with cushions formed in solid foam for use in commercial environments such as reception or conference areas.