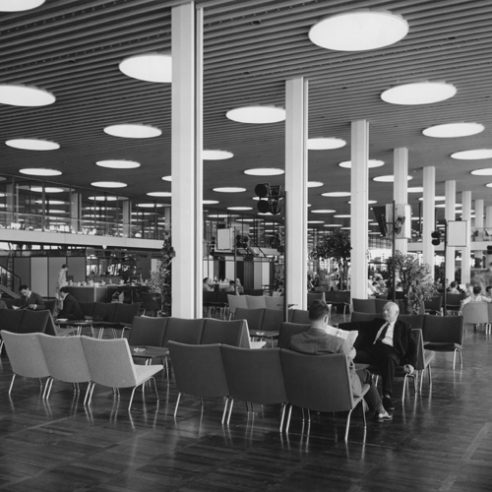 Ref: Hans J. Wegner. A Nordic Design Icon from Tønder. Edited by Anne Blond.It wasn’t long after its first presentation at the Furniture Fair in Fredericia in 1958 that the chair began being referred to as ‘the Angle Chair’. Today, however, this is a rather confusing description since it can be applied to many of Wegner’s designs – not least of all GE370 and GE34, which are both manufactured by Getama. Originally a lowstool and dining room chair were also part of the Airport series, but these have been

In the 1990s the sofa version of CH401 was designed especially for Kastrup Airport in a collaboration between Wegner and his daughter, Marianne. It has  a tubular steel underframe, and steel sides that can be equipped with armrests where desired. When Finnish architect Yrjö Kukkapuro was commissioned to fit out the SAS terminal at John F. Kennedy Airport in the late 1960s, he chose another of Wegner’s easy chairs, AP40, for the airline’s economy-class transit area.