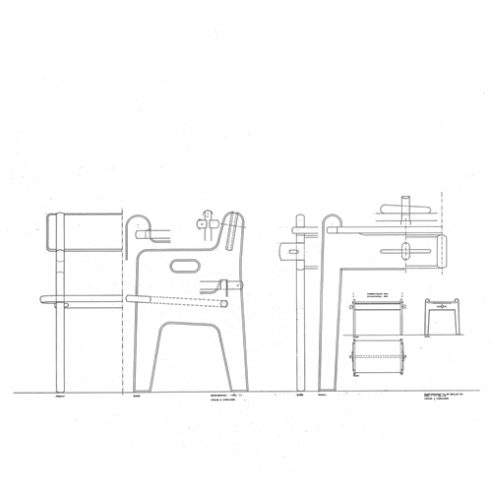 When Børge Mogensen asked his good friend Hans J. Wegner in 1944 if he would be godfather to his son, Peter, it also marked the origin of one of the most famous pieces of Danish children’s furniture ever to see the light of day – the chair that came to be called Peter’s Chair. Wegner designed Peter’s Table the following year.

In order to use it, a child had to first assemble the

four parts it consisted of and likewise the table. Tools were unnecessary and there was no danger to children tussling with the construction, since all the pieces were rounded, with no sharp corners.

Børge Mogensen, who at the time was head of the Danish Co-operative Union’s (FDB) drafting studio, wanted to make the children’s furniture a marketable product.

The furniture’s simple construction, plus the fact that it could be disassembled and stored without taking up much space, suited FDB perfectly, since the company’s image was one of producing practical, functional and affordable quality furniture that could fit in a two-room flat. Together Børge Mogensen and Wegner designed more children’s furniture that could be taken apart, but it was never put into production.