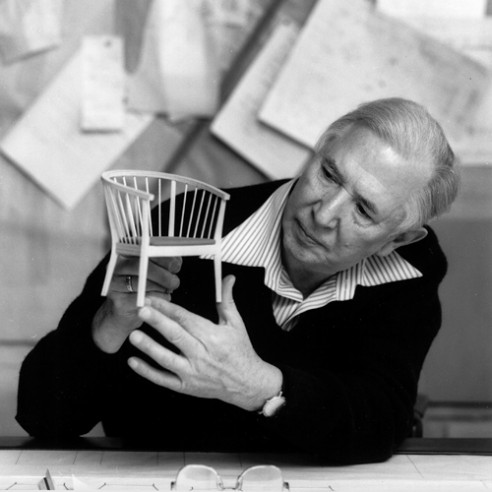 Solid, blonde species of Nordic wood combined with a woven papercord woven seat became characteristic features of many of the chair models Wegner designed specifically for PP Møbler  including PP112, which went into production in 1978.

The chair has clear references to dining room chair, PP62. However. The legs of PP62 are vertical, rather than oblique, and are cylindrical, while PP112’s are conical, tapering downwards from the seat. At first glance there is little difference to the structure of the  of the two chairs, especially when the position of the stretchers are viewed in isolation. However. The top rail is a simplified development from that of model PP201, where the visually elegant joinery and details in darker wenge and added lumber support have been discarded. These comparisons demonstrate how working on one or more chairs gave Wegner

inspiration for new models. On the other hand it had been a long time since Wegner had designed a spindle backed chair and utilized the rib motif charecteristic of English Windsor chairs. He had employed it back in the late 1930s and early 1940s in some of his furnishings for the Nyborg Library and Århus Town Hall, and a few years later in thedesign of his two most iconic spindle backed chairs, J16, the FDB rocking chair and JH 550, later PP550, the Peacock Chair from 1944 and 1947, respectively. PP112 is also related to PP105, an easy chair from 1947 (revised in  1979) in that its ribs completely encircle the person sitting on it.

PP112’s low seat makes it well suited to lounges, lobbies and other waiting areas where the sitter can find momentary refuge protected within its relatively high circular spindle back.