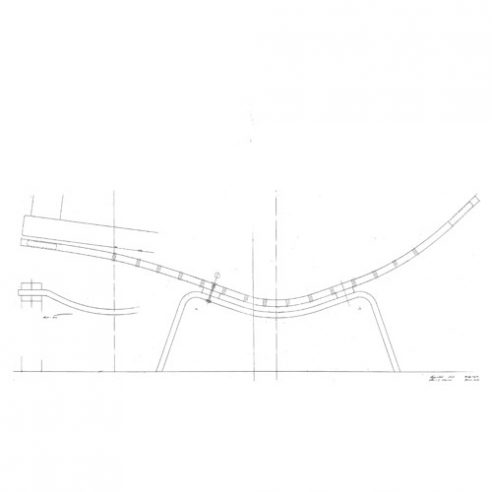 The Hammock Chair (PP135), a modern version of the chaise longue, was a type of furniture Wegner occasionally revisited.

In 1958 he made the Deck Chair (PP524) that was a reclining chair with a back that could be adjusted to different positions. With its neck cushion, wooden frame and use of flag halyard, it is reminiscent of PP524, except that where the deck chair’s frame is of solid timber, while laminated wood is used in PP135, and the deck chair’s interwoven seat and back resembles the Flag Halyard Chair’s horizontal weave, PP135 employs a weaving technique like a hammock.

The Furniture Fair at Copenhagen’s Bella Centre in 1967 marked the first time the Hammock Chair was revealed to the public, and

rumours about it spread fast in the furniture industry, both at home and abroad. As always, Wegner had been meticulous in his choice of materials. In this case it was laminated oak that could be formed into long, uninterrupted undulating lines, making the chair appear particularly beautiful in profile. This photogenic rounded form – or ‘firm softness’ – was very reminiscent of the shapes of the earlier and just as photogenic two-part shell chair, CH07. The CH07’s front legs, formed as a softly splayed ‘M’, reminding one of the Hammock Chair’s laminated underframe.

A little more than six months later, in January 1968, PP135 helped Wegner on his way to winning the American International Design Award for his collective contribution to furniture design.

Today PP Møbler has taken over the Hammock Chair’s production rights from Getama and produces it in both laminated oak and ash.