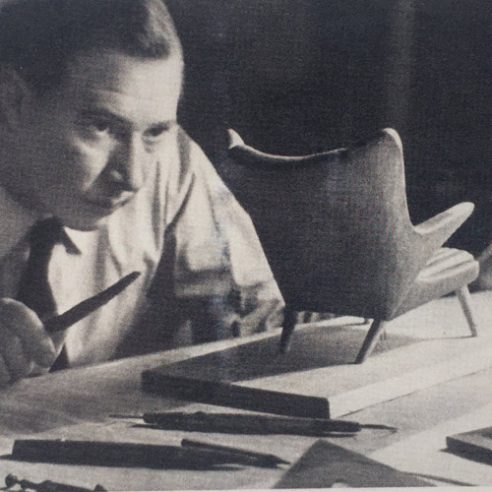 After having received the Lunning Prize in December 1951, Wegner was given a photo spread in the Danish national daily newspaper, Politiken. Here he can be seen concentrating on forming a chair out of Plasticine – a material he often used when making models of upholstered furniture. The chair was the Teddy Bear Chair. He had actually designed it the year before, but the manufacturer, AP Stolen, only began producing it in 1951.

In 1957 the Teddy Bear Chair was repeatedly in the media. A humorous little news item explained why. Under the heading, ‘Scandal’, the story read: ‘The Swedes have begun copying Danish chairs. The blasphemers have been apprehended and have confessed their “deceit”.’ The news item was referring to how AP Stolen found out a Swedish firm had plagiarized them, and how they subsequently sued the company and won. This was important for the Danish furniture industry’s international reputation, which since the early 1950s had been better than ever.

In 1966 Wegner commented on the plagiarism issue in Politiken. He was self-aware, but trenchant: ‘The Teddy Bear Chair, for example, has been copied by no less than ten manufacturers. This is reprehensible, still we must all admit to have learned something from our predecessors. As for me, I am inspired by furniture from China, Japan and England.’

The lair has an archetypal, universal form that inspires security and is reflected in the child’s urge to build lairs and caves. Another slogan, from a newspaper caption, read: ‘A chair you can live in’. The name ‘teddy bear’ itself gives immediate associations to the secure realm of childhood, the embrace one seeks when feeling insecure or unhappy.

The name, Teddy Bear Chair, was not one Wegner had come up with, but there is no doubt he revered sitting in big chairs he felt safe and secure in, that he could ‘bury’ his way into. He expressed it thus like this: ‘I like a chair to be so large that you really can see it and can “burrow yourself into” it.’

Furniture sales were mediocre for AP Stolen during the 1970s, forcing its owner, Anker Petersen, to think creatively and tell his distributors they could re-upholster old Wegner models if the customer so wished. This strategy did the trick and AP quickly received hundreds of orders to re-upholster the Teddy Bear Chair. Obviously the owners were so fond of their easy chair that they were willing to spend money to have it renovated.

PP Møbler had been the Teddy Bear Chair’s sub-contractor since 1953, providing its frame. The firm re-launched the chair in 2003 and it remains in production in spite of a price that currently matches that of a smaller new car. On the other hand, the lifetime of the car doesn’t match that of the chair.