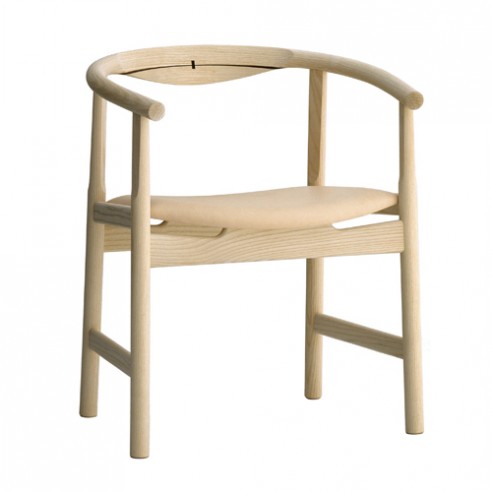 While PP Møbler had been collaborating with Wegner since 1953, providing AP Stolen with the wooden frame for the Teddy Bear Chair, the firm did not work directly with Wegner until 1969 when he designed PP203.

Thanks to its’ frame and downward sloping top rail, PP201 bears a faint resemblance to Wegner’s final China Chair PP56. Seen from the side, however, PP203’s back legs clearly lean forward more than those of the China Chair. It also constructed using fewer parts, giving it a more Spartan appearance. However.  This is compensated for visually by the elegant yet modest joinery in the back, which manages to make its’self noticed without being dominant.

PP203 has a strong construction, whether the seat is upholstered with fabric or leather or woven papercord or (PP201), and thus serves as a harbinger of the slightly later ‘ferry chair’(PP63/PP52/PP62). Like the ferry chair, PP203/PP201 is meant to be a dining chair that can be tucked partway in under the dining table.

The model is often used on public premises where food is served. Once used in a cafeteria of the Danish

Parliament, it can also to be seen in the dining room of the Møller Centre of Churchill College, Cambridge.

There is a certain kinship between the first chair Wegner designed specifically for PP Møbler (PP201/PP203) and this one, the Captain’s Chair (PP63). While PP63, with its woven seat, has since gone out of production, PP52 (with an attached upholstered seat) and PP62 (with a woven papercord seat) are still being made.