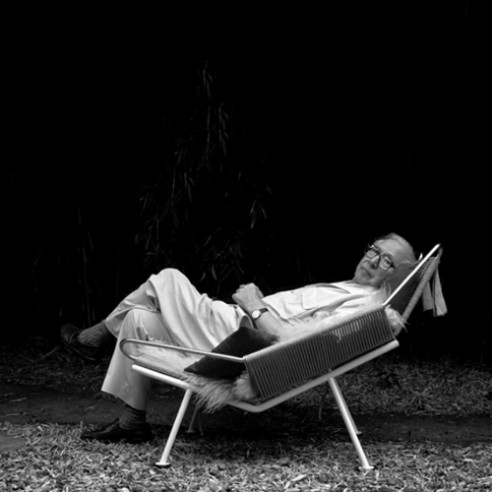 The relaxed sitting position came to Wegner one day at the beach where he reclined on a sand dune, sitting as relaxed as possible whilst keeping an eye on his family in the water. The Flag Halyard Chair is made from a solid stainless steel frame and 240 metres of specially made flag halyard which contains nylon so it doesn’t loosen with time. The head rest is available in leather and fabric options and the cover is specially selected long-haired sheep skin.

Hans Wegner received his breakthrough in 1949-50 with the design of his classic Round Chair. At this time he is also experimenting with new materials in two unusually big chairs – moulded plywood in Shell Chair CH07 a triple-shell easychair, and steel in the Flag Halyard Chair¹.

Thanks to his cabinetmaking background, Wegner had mastered to perfection the art of making furniture of wood, but he was also inquisitive and not at all afraid to think in terms of other media. This led him to use the travel grant from the Lunning Prize he had won in 1951 to go the United States specifically to gain insight into the use of new furniture materials.

New materials were not the only things Wegner experimented with during this period. The sitting position was also an issue in designing his triple shell Easy Chair, and especially his Flag Halyard Chair. Here the seated person’s reclining position was even more pronounced – halfway between sitting and lying down, somewhere between dream and reality – and a good way to let the subconscious take over and let the mind to flow freely. A filling station for creativity and the mind. It is said the inspiration for the half-sitting, half-lying position came to Wegner one day at the beach where he had buried his body into a sand dune until he was sitting as relaxed as possible without lying so flat that he couldn’t keep an eye on his family in the water.

innovation inherent in this sitting/lying position – and in Wegner’s case also the use of materials – is evident in the chair’s radically different free form as well. The naturally heavy steel is most pronounced in the bottom section, creating a huge contrast to the airy weave of the chair’s shell, which appears to be almost floating.

The twining technique was Wegner’s own invention and he did the weaving on the first Flag Halyard Chair himself, together with his wife. This was because it took more than one person to handle the 240-metre-long specially made flag halyard, which today contains nylon so it doesn’t loosen with time. Besides the seat and the high back surface, the chair was equipped with something resembling side-wings and armrests that due to their almost flat profile became integrated into the surface of the expansive back.

With its straight lines and blunt angles the chair shell’s overall impression reminds one of origami, of an imaginative shape that has emerged from an ingeniously folded piece of paper. Wegner himself referred to the shape as being inspired by a peat shovel he had seen as a child in the museum in Tønder.

The Flag Halyard Chair was on display for the first time at the Danish Arts & Crafts Association’s exhibition in 1950, and remained in production until the beginning of the 1990s. However its sitting position, use of sheepskin and choice of vibrant colours for the pillows all presaged the 1960s’ and 70s’ informal furniture, and in the wake of this a more unrestrained mentality that isn’t exactly something one immediately associates with Wegner. Still, one has to remember that Wegner liked playing around, so long as it was ‘serious play’, as he called it.

In 2002 PP Møbler received a classic design award from the Danish interior design magazine, Bo Bedre, for resuming production of the Flag Halyard Chair approximately ten years after it was discontinued.