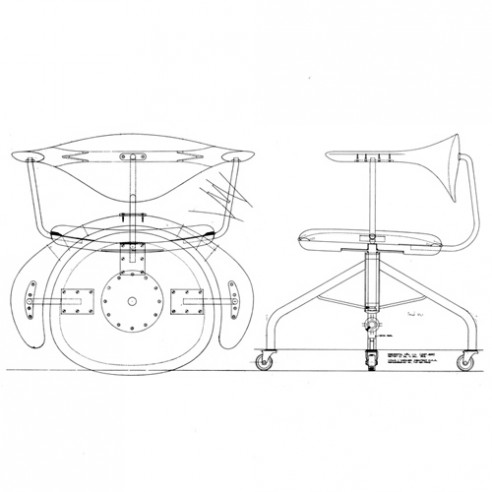 The idea of designing office furniture was not alien to Wegner when he created the iconic Swivel Chair (PP502) in 1955. The installation of office furniture accounted for a sizable portion of the work he did for prominent architects Erik Møller and Arne Jacobsen in fitting out Århus Town Hall in the early 1940s. Besides desks, telephone tables, cabinets, conference chairs and room partitions, etc. He also designed an office swivel chair, which in keeping with the furniture designer’s role in those days, most of this furniture was rather anonymous in appearance.

But Wegner’s standing had changed by the beginning of the 1950s, as had the drab offices of the Danish welfare state, giving him the chance to think more ‘Wegnerian’ in terms of uncompromising craftsmanship together with physical and spatial functionality within an artistic framework. The result was one of the most exclusive and extravagant office chairs in the history of design – something Wegner himself was aware of when he said it was probably more an office chair for a CEO than for the secretary.

Just as with Wegner’s later dining room chair (PP701), the desk chair combined cold steel with warm, organic wood and leather in harmonic and exemplary fashion, not least of all because it also succeeded in giving the steel a round, softer form. It was not only the top rail that demanded craftsmanship. Working and polishing the stainless steel was a difficult process that also had to be done by hand.

Over the course of time the Swivel Chair has been equipped with a variety of frames and produced using various kinds of steel, wheels and height adjustment mechanisms.

The top rail of solid wood is a marvel unto itself. The design is both ergonomically correct and supports the

user’s back in a relatively loose embrace so as not to confine the sitter to one single position. The freedom to sit on a chair in different positions was one of Wegner’s mantras. The top rail is also positioned low to support the small of the back, the result of an exchange of ideas over a number of years with Dr. Egill Snorrason. During the polio epidemic of the early 1950s Snorrason had studied the best sitting position for polio victims and had determined that supporting the small of the back was essential for sufferers weakened by the disease. Wegner adopted this principle and by 1955 the result could be seen in his Swivel Chair, as well as the following year in his dining-room/desk chair, CH20, where the backrest was also lowered to fit the small of the back.

The Swivel Chair’s top rail is made of three pieces of solid wood that because of the rail’s dimensions must be well-aged, have gone through a years-long drying process, to achieve the correct humidity prior to use. Its shape and joining method further develops features of the Round Chair where the top rail also comprises of three pieces of wood where Wegner had employed finger joints in order to keep the grain pattern homogeneous. While the resulting effect of the Round Chair is one of lightness and elegance, the solid oak that Wegner originally planned to use for the Swivel Chair’s top rail is heavily masculine. With potency and authority it manages to damp down the mobile under structure that allows the seat to swivel, the back to be adjusted and the wheels to turn.

Just as with a beautifully sculptured object in plywood by Tapio Wirkkala, the Swivel Chair’s sculptural top rail is so sensually executed that it is impossible to walk past without letting one’s fingers – and then back – feel its soft organic form. This sensual characteristic gives the chair an additional attribute that has helped place in the top league of office furniture.