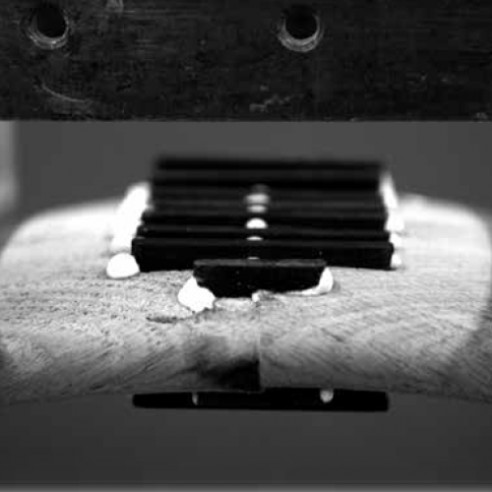 In a film by Hanne Mynster, Wegner explained the reason the top trail of the Round Chair was not joined by two dowels in a butt joint was that there was a chance a gap in the joint might appear if the two pieces of wood worked at cross-purposes. He must also have believed it possible to make a blunt vertical joint that was strong and beautiful.

In 1952 he managed to achieve this in a chair where the top rail consisted of two pieces of wood instead of three, that required a single joint. It was placed at the broadest point in the back, with space for not only two, but nine tenons, which made the joint so strong that the danger of any movement was minimal.

This was the Cow Horn Chair, which was originally intended as a dining room chair. The top rail is short so there is no problem drawing it up to a table. In reality, however, the chair is probably more often used as a spatial sculpture, and occasionally as an extra chair.

Its legs are slightly tilted and stabilized by four stretchers. The seat is made of woven cane its front corners penetrated by the two front legs – a construction with a lineage going back to the Wishbone Chair from 1949.

The top rail is always cut from the same piece of wood so the grain is homogenous. What was particular about this rail was that the nine tenons, which are made parallel with the grain

were not hidden. On the contrary, Wegner chose to accentuate this construction and make it decorative by using a dark wood.  This also served to centre the design an important detail when the chairs were used in a group.

It was the first time he so strikingly and decoratively made plain how the wood was joined, but it was to be far from the last. The chair points toward things to come with the Valet Chair, the Bull Chair, PP701, and others. The Cow Horn Chair quickly became one of Wegner’s iconic chairs. It lived fully up to being a challenge for the cabinetmakers, exuded high quality, and its ornamental constructional detail was innovative.

In 1954-57 it was chosen together with others of Wegner’s chairs to be part of the long joint-Nordic ‘Design in Scandinavia’ museum tour of the North American continent, and Johannes Hansen also received a gold medal for the Cow Horn Chair at a German craftsman’s fair in Munich. In addition, the chair was featured in a House Beautiful advertisement for Georg Jensen’s New York store by its Danish-American proprietor, Frederik Lunning, to promote the artisan tradition in Danish furniture design.

By 1982, according to the media, the Cow Horn Chair had become too expensive to fabricate and sell, and it went out of production until 1991, when PP Møbler incorporated it in its range of furniture, thereby resuming the demanding artisanship connected with the manufacture of the first so-called ‘livestock chair’.