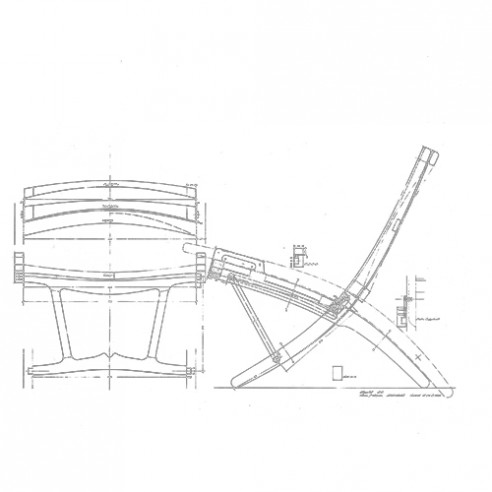 In 1929 the modernistic architect Mies van der Rohe exhibited his iconic ‘folding chair’ in the German Pavilion at the Barcelona World’s Fair. It was made of steel, and while unable to fold since its crosspieces were welded fast, the ‘folding-chair principle’ was clearly evident in the chair’s construction.

Twenty years later Wegner started working on the idea of a similar folding chair. What he did was what Nordic designers commonly did when they had to relate to international modernism. He converted the cold steel to warmer wood and the upholstered leather cushions to woven cane. He avoided the chair appearing to be something it was not. His chair would of course fold.

The Folding Chair (PP512) not only folds, it can even be hung on the wall from a specially designed hook so it doesn’t take up floor space when not in use. There is a little indentation in the middle of the distinctive frame that supports the seat from which to hang the chair.

When collapsed, the distinctive seat support pivots up-wards, guided along a track cut into the inner side of the chair’s legs. The back legs, arc to form the support for the cane seat that is woven through a slot cut through them. A construction detail that was also in evidence in PP501 (the Round Chair) Wegner exhibited along with the Folding Chair at the Cabinetmaker Guild Exhibition in 1949.

It was necessary, for the cane seat on PP512 to be firmly attached. This was not straightforward. If the slot cut in the seat

support through which it passed was too long it would conflict with track cut into the inner side of the back legs weakening the construction. Wegner resolved this by adding the two large handles, designed in order to shorten the length of the slot and provide the necessary strength to the seat construction.

In spite of the frame’s light appearance, a seated person can put their entire weight onto the handles to assist standing without the chair tipping over.

Working sketches from Wegner’s hand testify to the fact that even calculating the sequence of the cane weaving process was a technicality he did not entrust to others. All construction could best form a synthesis if Wegner saw to them himself.

PP512 is very ‘Wegnerian’. That is self evident. The mechanics, form, function and the carpentry and weaving craftsmanship are beautifully integrated. It is a straightforward, functional, intelligently constructed, sensual chair, its features seem naturally obvious, even though they are far from it. An indication of good quality in design is that the user never thinks about how the chair he or she is sitting on was constructed!

Nor was this the last occasion Wegner worked with the folding-chair principle, which he used again a number of times, for example in his deck and garden chairs. In the following year, 1950, the Folding Chair served as the starting point for the classically beautiful and timeless easy chair, CH25, which Wegner designed for Carl Hansen & Son. Like PP512, it employed hand weaving, but this time using the less expensive papercord.