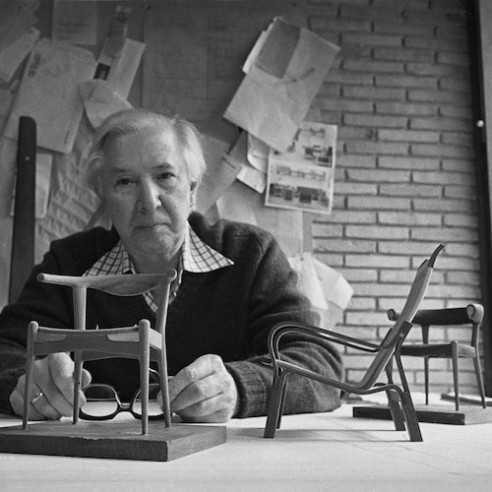 The chair has four slightly diverging legs with stretchers between them, and a curved woven cane seat. Its top rail is made of two pieces of wood, joined in the middle of the back with six contrasting tenons. Wegner didn’t like concealing his construction solutions. If they exhibited good artisanship, they were likely to be beautiful in themselves and therefore should not be hidden from view.

When journalist and author Henrik Steen Møller wrote a book in 1979 that primarily dealt with Wegner and his production of chairs, he chose the significant title, Theme with Variations. This expression perhaps applies best visually when looking at the chair variants related to the theme of ‘livestock chairs’, to which the Bull Chair was added in 1961.

Wegner designed two upholstered versions of  the Bull Chair expanding on the theme of  ‘livestock-chairs’. One version had an upholstered seat lying

within the frame as with the Round Chair, while in the other, Wegner detached the seat from the frame and let it sit, appearing to float, supported on rails fore and aft that curve gently upwards towards their middle. By creating space beneath the seat Wegner lightened the appearance of the chair.

Even though the Bull Chair as it appears today is solidly built and robust, it is still only the ‘little brother’ compared to the Buffalo Chair. The Buffalo Chair was launched in 1957 with an upholstered top rail and high back, as well as a similar version from 1961 where the top rail was at an even height that was equally as imposing since it reached further around the sides. These the variants whose seat and back were upholstered with dark leather exuded a kind of masculine gravity that few of Wegner’s other chairs possessed. The exception was the Ox Chair from the same period.

Throughout the 1980s the Bull Chair was only produced to special order. In 1991 PP Møbler undertook the production along with the Cow Horn Chair, together with other Johannes Hansen models.