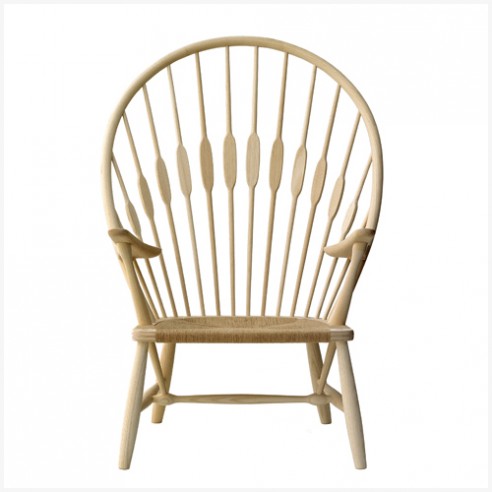 The war years in Århus had been educational for Wegner, but in many ways they had also been difficult. When the Second World War ended there was no doubt he wanted to move back to Copenhagen where, among other things, he had access to Johannes Hansen’s workshop¹.

Here Wegner was well received by Hansen’s attentive and skilful shop foreman, Nils Thomsen, who gladly worked alone with him in the evenings leading up to the Cabinetmaker Guild exhibitions. It was on such an evening the Peacock Chair came into being after the initial sketch had been modified a number of times.

The chair was an example of a totally ‘free’ furniture project, brought into being by the joy of creating, which was the method Wegner liked best. Perhaps this is why, in the tastes of the time, it became his first truly iconic chair.

By present-day tastes two of Wegner’s older chairs could also be candidates for this title. But the high-backed rocking chair (J16) faded perhaps a bit anonymously into FDB’s practical world of furniture, and Fritz Hansen’s China Chair (FH4283) had thus far been almost unmarketable and had yet to make a name for its’ self. The Peacock Chair, on the other hand, had clear graphic lines and was visually imposing. It was extremely well suited for exhibition and thus attracted notice. It also represented the quintessence of Wegner’s designer talent, where solid cabinetmaking skills and the classic furniture tradition encountered an inherent, highly developed two and three dimensional artistic sense.

In 1951 the chair was exhibited in England, where BBC Television purchased it to show on the screen in the interval between programs. The basic inspiration for the Peacock Chair was the classic British Windsor Chair that Wegner had previously worked with during his Nyborg Library assignment, as well as on other occasions.

The Windsor is a sensible spindle backed chair from 18th-century England with a solid wooden seat and lathed or turned obliquely positioned legs. It is solid but also light, often using different types of wood for different parts of the same chair. The spindles in the back are

attached either in a bowed curve or in a horizontal top rail, giving the chair’s back the appearance of a comb.

Several of these principles have been applied to the Peacock Chair, though none identically. The sitting height has been lowered, making it a chair to relax comfortably in. This has also meant replacing the solid wooden seat with a softer one of woven parpercord, flattening the spindles in the back at exactly the spot where the shoulder blades rest, and using wider, much more comfortable and tactually inviting armrests.

All these changes make the Peacock Chair visually exciting, an effect that is enhanced by the beautifully executed mortise and tenon joints of the seat frame, and legs that are fixed through the seat with wedges in contrasting colours. All of these are functional solutions that add artistic detail. The chair is also made of solid wood, originally ash, with armrests of teak. The only exception has been the bow, which originally was not steam bent, but made of laminated wood. PP Møbler, however, has always used steam bent timber.

Wegner made his Fish Cabinet in 1944, which could lead one to believe he was fond of giving his furniture animal names. However. This was not the case. ‘The Peacock Chair’ was a name his colleague, Finn Juhl, christened the chair at a later date. Juhl himself had tried to have one of his easy chairs popularly known as ‘the Pelican’. While neither Wegner nor Juhl really cared one way or the other, animal names helped brand their furniture, emphasizing their organic nature and making them easier to remember.

In 1950-51 Finn Juhl was given the task of furnishing the Trusteeship Council’s hall at the United Nations’ headquarters in New York, which underwent extensive restoration between 2009 and 2013. This restoration included the North Delegates’ Lounge, whose original interior was from the 1960s, but which a Dutch designer team lead by Hella Jongerius was assigned to re-furnish some years ago. The light-filled room with its enormous windows facing the East River was finished in 2013. Today it is a room with soft, colourfully upholstered contemporary furniture. The only furniture spared from the 1960s décor was the long row of Wegner’s Peacock Chairs.