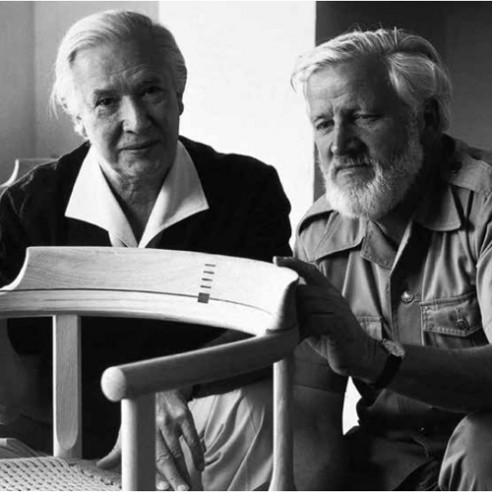 There is a certain kinship between the first chair Wegner designed specifically for PP Møbler (PP201/PP203) and this one, the Ferry Chair (PP62).

Both are simply constructed, strong armchairs with a the special back detailed in dark wenge used both as a decorative detail and a functional device to harmonise the appearance of a number of chairs when grouped together. They are made in both a relatively light oak and a very light ash to accentuate this detailed joinery and because these blonde wood types are typically Nordic and suit Danish tastes in furnishing homes and public buildings.

PP62 was designed in 1975 for the Danish shipping line, DFDS, for use in the dining areas of their ferries’. The chair was necessarily robust and its wood seasoned, since it had to be able to stand storms at sea and be used daily by a wide assortment of passengers.

This is the most static and classic of all Wegner’s chairs. Its frame is strictly geometrical and the armrests embrace the person seated while the gracious backrest provides state-of-the-art comfort.

In 1978, PP Møbler completed what was its largest single

order to date when more than 800 special versions of the pp52 chair were delivered to the ferry ‘Dana Anglia’  sailing between Denmark and England.

In 1982, a customer contacted the workshop wanting to buy a new seat for a pp52.  He brought the chair to PP Møbler, and it turned out to be one of the special versions exclusively made for the ferry. They had found the chair frame on a beach somewhere on Denmark’s west coast near Esbjerg. The chair had obviously been lost after having fallen overboard in rough seas somewhere between Denmark and England but had apparently completed its own journey across the North Sea.

While the papercord seat was missing, having rotted away in the sea the chair itself was intact and as good as new after PP Møbler wove a new seat for the lucky beachcomber.

With the chair’s close attachment to the maritime world, it’s not hard to understand how it got its name, the Ferry or Captain’s Chair.

Later, the manager of the ferry company called PP Møbler asking to buy two new chairs for the ferry in replacement of two chairs that had been damaged. Master of Craftsmen Ejnar Pedersen wanted to deliver the two chairs free of charge arguing that the chairs should not break. ‘No’, said the ferry manager, ‘we really want to buy the chairs. You see, the ferry has been through the most terrible storm while anchored. The entire inventory was completely destroyed, piled up in the back-end of the ferry. It has all been replaced – except your chairs Mr Pedersen. All but 2 chairs were intact’.

More than 30 years after the ferry’s virgin journey, it has been renamed and upgraded several times and it has sailed on a number of different routes between Denmark, the UK, the Netherlands, Poland, Norway and Sweden. Through all the years, the chairs have remained on board!