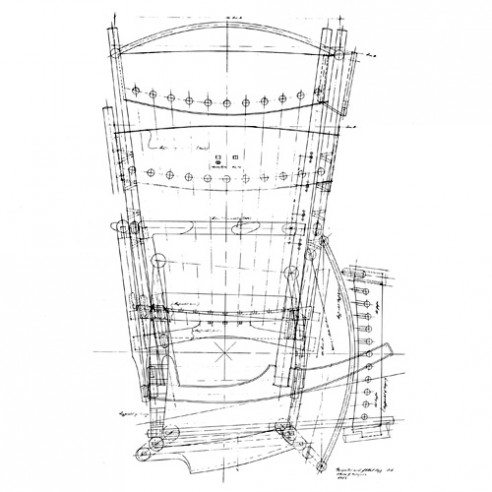 After all the attention his Hammock Chair (GE135) received in 1967, Wegner wanted to use the attractive hammock-weave pattern again, and the following year he designed  a sturdy lounge chair consisting of large sections of solid timber that contrast with the almost spider-web-light flag halyard back. Called the Web Chair it is currently produced by PP Møbler as their model pp 129.

for PP Møbler in 1984. With different armrests and re-shaped legs set on runners, the chair’s expression was not as robust as JH719. However. It retains its’ V-form fanning upwards from the floor, a loose neck cushion, and not least of all the characteristic woven seat and back, made from approximately 80 metres of flag halyard.

Being a rocking chair, a piece of furniture on which even a child can move back and forth, the functionality of PP124 perfectly suits its light and airy expression. Wegner must have been satisfied with the shape of the armrest and the chair’s V-shaped back, since he used these details again in two chairs he designed in 1990 – the so-called Møller Chair (PP114), and a conference room chair, PP240.