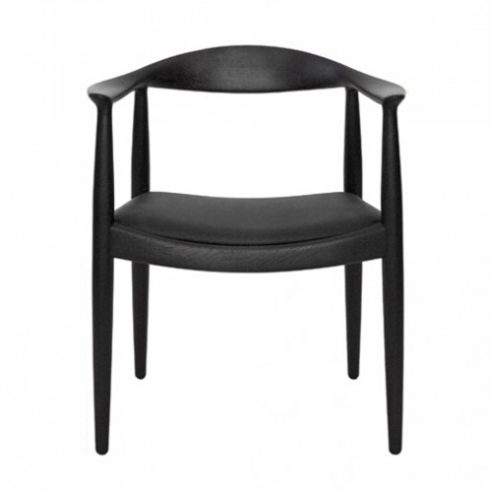 The black version of Hans J. Wegner’s  Round Chair is produced in solid oak or ash with a seat in the finest quality aniline leather.

When first exhibited the Round Chair attracted little notice from the Danish media when Wegner exhibited it at Copenhagen’s Cabinetmaker Guild Exhibition in 1949. Later, in a letter to journalist/writer Henrik Steen Møller, Wegner had this to say about it: ‘As for my round chair, The Chair, there wasn’t a word in the Danish newspapers.’ But all of this was to change when news of the exhibition reached the American press, thanks to architect Viggo Steen Møller, the editor of the periodical, Dansk Kunsthåndværk (Danish Arts & Crafts), who served as intermediary.

By February 1950 the American interior design magazine, Interiors, had published a several-paged feature about the 1949 Cabinetmaker Guild Exhibition. The Round Chair was given a full-page photograph, provoking many queries as to where the chair could be purchased. Somewhere between February 1950 and July 1959 it became popularly known as simply ‘The Chair’, since that is how it was referred to in a 1959 article in the interior decoration magazine, House Beautiful, titled: ‘Hans J. Wegner. Poet of Practicality’.

Wegner rarely made comments in public, yet on several occasions he spoke wryly of the chair’s flattering nickname and the notion that he had created the perfect chair. In a mid-1990s interview with Bill Ratje he expressed it this way: “The Chair”. What nonsense! You can’t make something that’s definitive. I still believe it can be done better. Maybe just with just four straight sticks.’

Nevertheless, back in 1959 he ventured to say: ‘Personally, I think it’s my best achievement. Not because of its export success, but because I have been more thorough with it than anything else.’

In 1950 the Round Chair could be purchased only from Johannes Hansen in Copenhagen, who suddenly began receiving many orders. In a film by Lise Roos, Wegner said: ‘The Americans came and wanted 50 to 100 of them, and Johannes was about to fall off his chair … It was almost burdensome. We were happy just being able to sell the four from the exhibition.’ Making the Round Chair was a demanding piece of workmanship. It took time and could not be rushed through by American impatience, something that may have irked our master cabinetmaker.

It is unlikely that up to one hundred individuals in the US suddenly wanted to own the Round Chair. Johannes Hansen recollected a businessman from Chicago showing up at his store in 1950, hearing from a professor from the state of Washington, followed by a doctor from San Francisco. While these people were likely to have been quite interested in design, most of the buyers were probably a small group of interior decorators hired to furnish the homes of wealthy Americans.

In November 1959 Johannes Hansen began legal proceedings against a person named Christian Hansen who had fabricated and exported hundreds of Round Chair copies to the US. Two years previously, furniture manufacturer Anker Petersen had won a case against a Swedish company that had plagiarized Wegner’s Papa Bear Chair, and Wegner himself had won a plagiarism case against a Norwegian firm over one of his sewing tables. Johannes Hansen won his case, too, which in 1960 resulted in the Round Chair being recognized as a work of art by the Danish High Court.

One suspects the Museum of Modern Art in New York was in agreement with the Danish court’s verdict, since it had already a year previously declared the Round Chair one of the best-designed objects of the 20th century.

In 1960 the United States saw to it that the chair experienced a huge revival. It was an election year and the first time a presidential election was being televised, including a debate between the two candidates, John F. Kennedy and

Richard Nixon, both sitting in Wegner’s Round Chair. Not only did the chair receive prime-time television coverage, the American public also noticed how relaxed Kennedy sat, in spite of having a bad back due to a wound he suffered during World War II.

It’s hard to tell whether the presidential debate was the direct cause, but in any case Wegner and Johannes Hansen were contacted the same year by an American manufacturer who wanted to buy the rights to produce 15,000 Round Chairs in the United States. Wegner and Hansen refused. They wanted to keep production in Denmark, since they preferred ‘… having the chair executed at a level of quality we can vouch for’.

That the chair was made specifically for the Cabinetmaker Guild Exhibition was no accident. Ever since cabinetmakers began regularly exhibiting with architects in 1930, one of the most important purposes of this event was to keep the artisan tradition alive in the cabinetmaking profession. This was something Wegner took seriously, not least of all in working on his Round Chair. Even though he respected the arrival of machinery in workshops and throughout his career designed a number of ‘machine friendly’ chairs, there still had to remain something that only the hand could master. Or hands, in this case. Because while the Round Chair was fashioned from Wegner’s drawings, its physical manifestation was the result of a collaboration with Johannes Hansen’s shop foreman, Nils Thomsen.

Wegner described the chair’s seminal idea as follows: ‘What do you do when you want to make something that is typically Danish? First, there is oak – oak wood is typically Danish. Then there’s the construction: four straight legs that are put together with four crossbars and held together at the top by a crestrail.’ It sounds simple, which was also the intention of furniture makers after World War II. As Wegner said, ‘The objective was to make things as simply and correctly as possible, to show what we could create with our hands and try to make the wood come alive, give it soul and vitality, and to get things to appear so natural that they could only be made by us.’ The Round Chair became a perfect expression of this thinking.

The four straight legs were tapered toward the top and bottom. Unlike square legs, this made the chair appear lighter. The top of the back was given a beautiful propeller shape that glides elegantly and effortlessly from its almost vertical position into a gentle horizontal slant that became the armrests, and from there, down into the legs. These soft continuous lines spoke so directly and sensually to the body that it’s no wonder a person immediately wanted to try sitting on the chair.

In the version from 1949 – so light, it can be lifted with one finger – the seat is woven with cane through the chair’s seat frame. The frame is set high, since the corners where the legs are mortised is necessarily robust. The back consists of three pieces of wood joined with dowels and a simple slightly clumsy butt joint concealed beneath a coil of woven cane. When Wegner decided the following year to develop a version of the chair with an upholstered seat and for aesthetic reasons wanted to expose the beauty of the wood, he had a visual challenge on his hands. He resolved this by using two perfectly excecuted fingerjoints which looked much better aesthetically.

The Round Chair was a piece of furniture Wegner was unable to simply draw or sketch into being. He also had to model it at the workshop. In his own words: ‘I have also worked on it as a cabinetmaker. The back and armrest construction was something I couldn’t figure out at the drafting table. I had to form it at the workshop.’ In other words, his intimate knowledge of artisanship proved extremely useful in the design process itself.

The chair with the joints concealed beneath cane is normally no longer made. However, PP Møbler on the occasion of Wegner’s hundredth birthday was given permission to produce a limited series of this version. Otherwise the chair is still being made with either a seat of woven cane or one upholstered with fabric or leather.