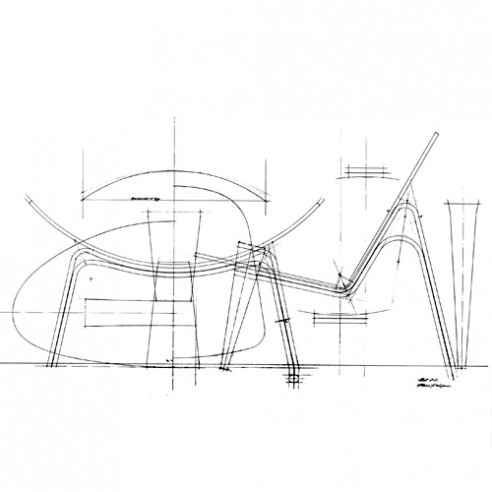 Shell Chair – Black Edition
The Black Edition of Hans J. Wegner’s Shell Chair CH07 is finished in smooth black lacquer over a laminated beech frame and veneered shells. Black upholstery fabric is by Halingdal. CH07 Shell Chair was first designed in 1963 and re-released in 1998. Originally Wegner’s ideas for the legs and upholstery were different from how the chair looks today.
Ref: Hans J. Wegner. A Nordic Design Icon from Tønder. Edited by Anne Blond.

In 1963 he tried again. His new two-piece shell chair was shown at the Cabinetmaker Guild Exhibition, both in a painted version and one with teak-veneer shells and a beech frame. This chair, too, was unsuccessful, both

with colleagues in the Guild and potential buyers. The Guild felt the chair was too industrial a product to belong in the exhibition, and customers liked neither the chair’s idiom nor the fact that it took up so much space. On top of which it “looked uncomfortable”, which in reality was a completely mistaken assumption.

That same year the Danish interior design magazine, Bo Bedre, gave the chair its classic furniture award, and today Shell Chair CH07 with its almost free-floating seat is considered a modern classic in furniture design. It could well be for this reason that Carl Hansen & Son decided to produce an exclusive version of the chair in 2013 on the occasion of its 50th birthday. 150 copies were put on the market with a seat and back made of teak, an oil-treated oak frame, and African goatskin upholstery.