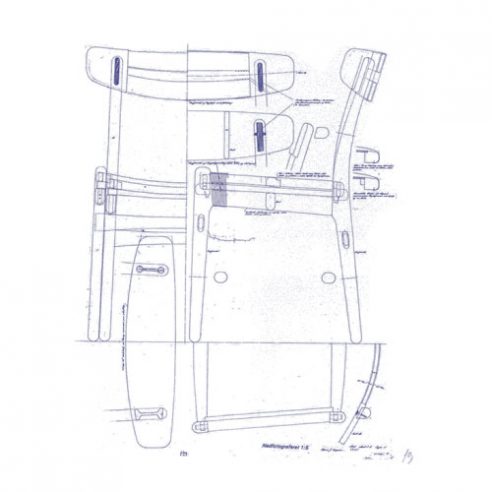 This all black version of the Carl Hansen dining chair CH23. The CH23 ‘Side Chair’ was one of the first pieces of furniture Wegner designed for Carl Hansen & Son in 1951 first presented at the Fredericia Furniture Fair alongside CH25 – the easy-chair variant of CH23. CH25 is a fixed, more industrial version of the more sophisticated Folding Chair with woven cane (PP512) Wegner had designed in 1949.

The two Carl Hansen & Son chairs show a particularly clear kinship in their application of the same weaving technique, which in the easy chair entails the use of over 400 metres of papercord and ten hours of hand work. The effect is particularly beautiful in the dining room chair, where Wegner allowed the weave to continue down over the seat frame and side

stretcher in a distinctive decorative pattern