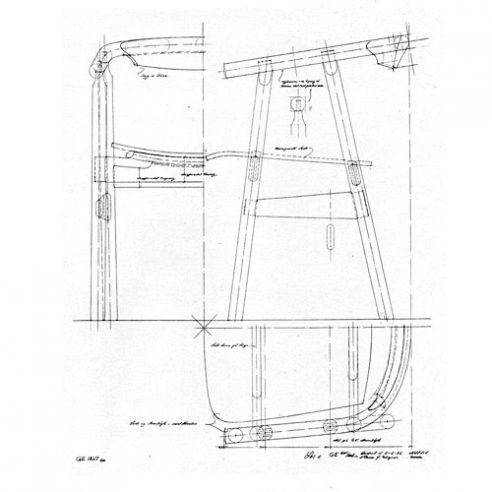 GE201, also known as ‘the People’s Chair’ was first presented at the Furniture Fair in Copenhagen’s Bella Centre in May 1982 and was the result of a long development process. The chair initially numbered GE601m is a simplified version of an earlier model GE525.

GE525 was one of two chairs that dated back to 1969 when Wegner was designing his first two models for PP Møbler. However, PP Møbler decided to produce only one of the chairs offering the other to Getama.

Getama, whose furniture factory was in Himmerland in northern Jutland, put it into production in 1976 with a simplified top rail as GE525. In 1982 in order to make the design less costly to produce the construction was further simplified by Wegner.

The revised version, was given cyclindrical

legs, straighter less sculptured stretchers, a modified top rail and less complex joinery where the legs and top rail intersect. GE201 was purchased by DSB (the Danish State Railway) to be used in its restaurant at Copenhagen’s Central Station, as well for the dining areas on its ferry between Helsingør and Helsingborg, Sweden.

The original design, GE525 had conical legs, an arched, elevated back, sculptured stretcher, and slightly complex joinery where the armrest and leg met.

While it is possible to discern letters of the alphabet in the steam-bent top rail’s U-shape and the side construction in the form of an ‘A’, the chair was never christened the ‘U-Chair’ or ‘A-Chair’ in Denmark. Today, however, GE525 is produced exclusively for the British chain of Department Stores, the John Lewis Partnership, under the name, ‘U-Chair’.