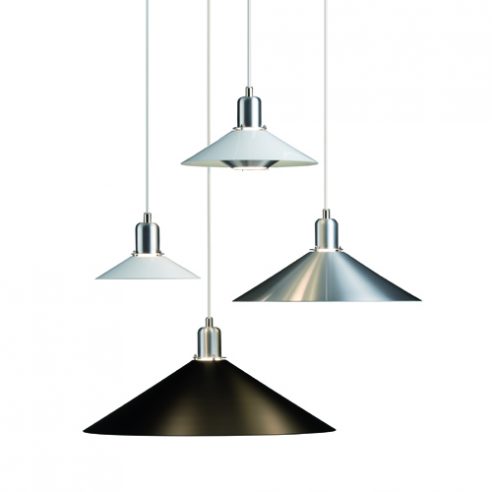 Launched in 1971 by the Danish Company Design Forum, the Tip Top Pendent has been produced by Pandul since 1978.

The Tip Top lamp shades were a development of the multitude Tip Top pendent designed by Jørgmen Gammelgaard following an assignment for UNESCO in Samoa under a UN initiative. The young architect was a consultant on the design of school furniture.

Available in four sizes in a choice of brushed aluminium, painted white or black finish. The three larger diameters have a removable shield to reduce glare from

During their time in Samoa Gammelgaard and his wife Karin lived in rather primitive conditions with just one light source in their hut: a neon tube standing on the floor in a corner providing lots of light but also giving off excessive glare.

After returning to Denmark Jørgen Gammelgaard designed the multi-shade TipTop lamp that was later followed by these single shade versions.