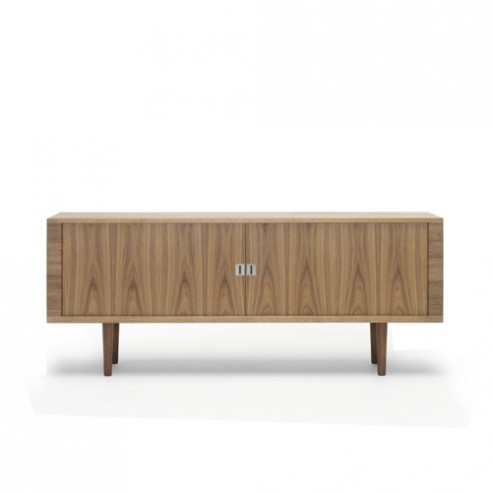 Based on Hans J. Wegner’s original drawings Carl Hansen & Son relaunched this credenza in 2014.
Originally it was part of a series produced in teak and palisander rosewood although this Carl Hansen and Son version reintroduced on the Centenary of Wegner’s birth is available veneered in oak or walnut. All internal fittings are made from solid oak.

Although it looks simple, the credenza features an advanced design with roller shutter doors, requiring double sides and rear panel between which the roller shutters run along a track which is hidden from view when the unit is opened.

been updated and have been set in 2cm from the front and rear edges to allow for a skirting board so the credenza can be placed flush up against the wall.

The legs are either turned in solid oak or walnut or in flat steel section so as to compliment  Wegner’s CH100 series of chairs. The different variants allow the credenza to match a wide range of interior styles and settings.

The Wegner credenza is an ideal surface for displaying you favourite objects, while other items can be stowed behind the elegant roller shutter doors. The interior features adjustable shelves and pullout drawers designed to enable simple installation of additional drawers.