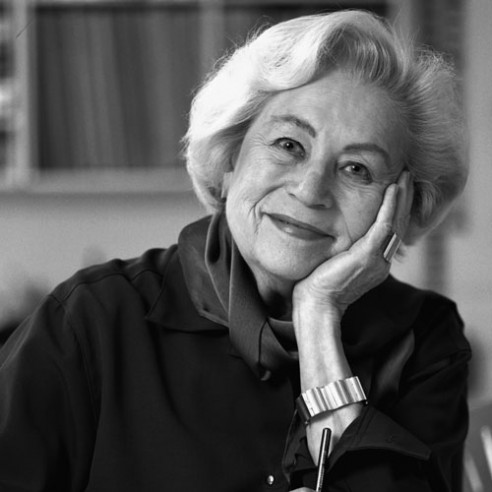 Nanna Ditzel was one Denmark’s  most versatile and creative female designers of the 20th century. Ditzel worked with a wide range of forms designing furniture, jewellery, tableware and textiles using mastering an astonishing range of materials – wood, wicker, silver, ceramics and fiberglass.

Born in Copenhagen, Ditzel started her career as an apprentice cabinetmaker at the Richards School in Denmark before moving on to study furniture at the Royal Academy’s furniture school under the great craftsman of his day, Kaare Klint. She graduated in 1943.

While at the furniture School she met her future husband and collaborator, Jørgen Ditzel, and together they began entering (and winning) design competitions and exhibitions while they were still students. The two married in 1946 and formally established their design studio together. Jørgen Ditzel had trained in furniture upholstery a skill that contributed to their joint experiments in designing flowing chair and sofa designs. Together they won numerous accolades, including silver medals at the Milan Triennale in 1951 and 1957 and a gold medal in 1960, and the prestigious Lunning Prize in 1956. But their life and work together ended abruptly when Jørgen passed away unexpectedly in 1961 at the age of 40.

Ditzel’s early work adhered to the classic Danish modern tenets of simplicity, comfort and quality, producing armchairs with softly curved backrests much in the spirit of Hans J. Wegner. Ditzel’s signature piece of that time is her Ring Chair Designed in collaboration with her husband, Jørgen Ditzel, a fabric maker, the chair produced today by Getama A/S has a semicircular padded armrest that seems to embrace the sitter. Ditzel began designing in wicker and in 1959 produced the ‘Hanging Egg Chair’. The piece, suspended from the ceiling by a chain, became a favourite for fashion shoots and an icon of 196o’s design.

In 1956, Ditzel began designing for the Danish silverware firm Georg Jensen, an association that lasted some 40 years during which she created organically shaped jewellery, barware, ceramic tableware and even tablecloths. Like her contemporary Verner Panton Nanna Ditzel was not afraid to embrace industrial materials designing a series of fiberglass chairs in the mid-1960s. Some of her most visually provoking work came late on in her career with pieces for Fredericia Furniture such as the ‘Bench for Two’ in 1989 with its bold silk screen printed finish, and the ‘Trinidad chair’ in 1992, with it’s beautifully fretted back of moulded plywood.